Contingency tables (sometimes called crosstabs) are used to summarize and analyze the joint distribution of two variables, possibly stratified by a third. A table of observation counts will be created for each combination of the variables in the row list and each variable in the column list. If a stratum variable is specified, separate tables are created for each level of the variable.

To create a contingency table, choose Contingency Tables from the Analysis menu on the menu bar of the Console window. The following window will appear. 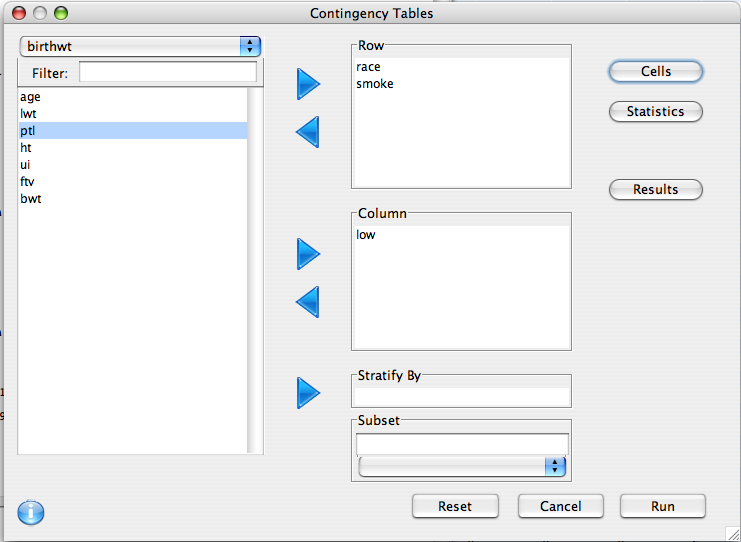 To create a contingency table to relate the answers to two different survey questions add the row variable and column variable to the appropriate spaces and click Run. The results will appear in the Console Window.

In addition to observation counts, there are a number of additional cell values that can be displayed. 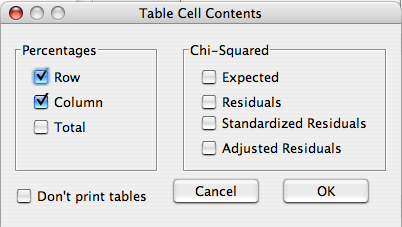 There is a rich variety of statistical tests that can be performed in the contingency table framework. Quite a few of the most important ones are covered by the dialog. 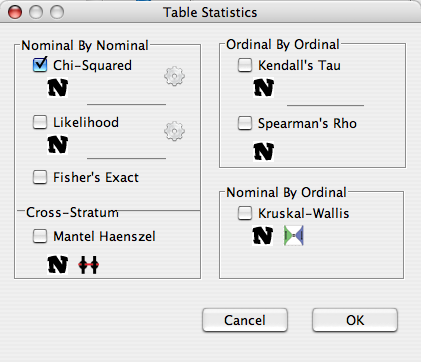 Nominal variables are factors with no natural ordering such as race and gender (as opposed to education and tax bracket). There are three tests implemented that can be used to compare two nominal variables:

Ordinal variable have a natural order, such as building floor or height.

Both correlations measure the strength of monotonic assosiation between the two variables on a scale similar to Pearson's Correlation. The relative virtues of two approaches have been debated, and some favor the use of kendall's tau.

Comparing one nominal and one ordinal variable

Through out Deducer, though not R in general, we use the mid p-value for all exact and monte carlo tests as opposed to the "standard exact" p-value. The mid p-value was chosen because it will always be as close or closer to it's nominal level than it's more conservative counterpart. A more thorough discussion is available for interested readers.